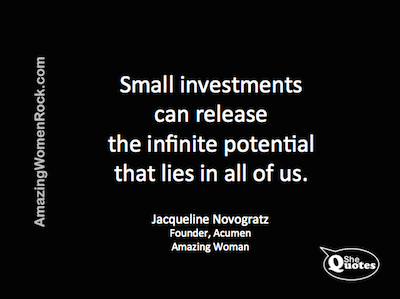 Jacqueline Novogratz founded and leads Acumen, a non-profit organisation that takes a businesslike approach to improving the lives of the poor.

In her book, The Blue Sweater, she tells stories from the new philanthropy, which emphasizes sustainable bottom-up solutions over traditional top-down aid. Besides being an anti-poverty activist, Novogratz is a gifted speaker and storyteller.

On Investing In Ending Poverty (July 2005)