Sheryl Sandberg on gender and the roles of women and men. 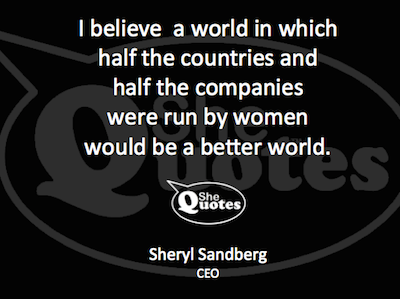 “Women are not making it to the top of any profession anywhere in the world.”

“How are we going to fix this?”

“How do we change those numbers at the top?”

“What messages do we tell ourselves?”

“What messages do we tell the women we work for and with?”

“What messages do we tell our daughters?”

“Women systematically underestimate their own abilities.”

Women say they did a good job because “someone helped them, they got lucky, they worked real hard.”

“No one gets to the top, if they sit on the sidelines, or if they don’t believe in themselves.”

“We’ve got to get women to sit at the table.”

“I believe a world in which half the countries and half the companies were run by women would be a better world.”

“I want my daughter to have the choice not just to succeed, but to be liked for her accomplishments.”

“We have to make it as important a job to work inside the home for people of both genders.”

“Households with equal earning and equal responsibility have half the divorce rate.”

“Your job needs to be challenging, and rewarding.”

“You need to feel that you’re making a difference.”